Currency - All prices are in AUD

Currency - All prices are in AUD

On the back side of the screen you can see one or several labels with numbers. Almost every screen on the market today have manufacturer's code and screen size included in the model number. You will need the manufacturer part number to find the right replacement screen.

Below is a list of LCD screen manufacturers with their abbreviations - if you click on the name (in blue) you will see an example of that manufacturer's parts label. 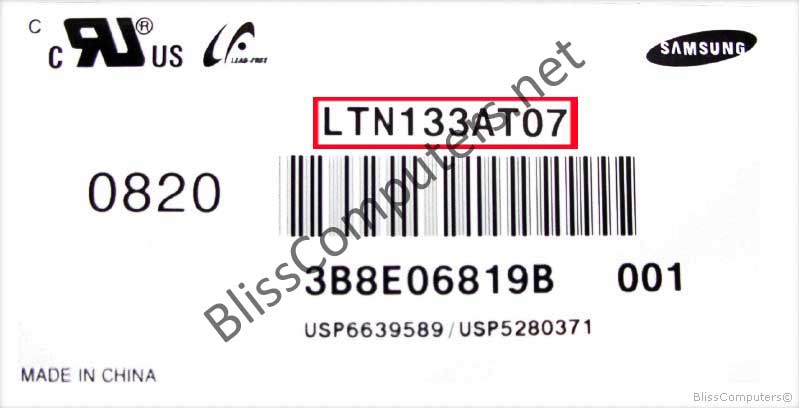 Chi Mei Group along with IBM Japan set up International Display Technology, which it subsequently sold to Sony.

Chi mei Part number start with "N". Some Screens have Revision numbers. Like in this example, the part number is N154I2-L02 followed by revision number indicated by Rev.C1. If you had to search for this particular screen on this site, you should search for "CHI MEI N154I2-L02 Rev. C1".

Toshiba Corporation (manufacturing company, headquartered in Tokyo, Japan Toshiba-made Semiconductors are among the Worldwide Top 20 Semiconductor Sales Leaders. Toshiba is the world's fifth largest personal computer manufacturer, after Hewlett-Packard and Dell of the U.S., Acer of Taiwan and Lenovo of China and US.

Toshiba part number starts with "LTD".In this example, the part # is LTD121EA4XY.

Chunghwa part number starts with "CLAA".In this example, the part # is CLAA154WB03.

Sharp, a Japanese electronics manufacturer, has developed into one of the leading electronics companies in the world. LCD technology continues to be a key part of Sharp's product range, in both the component and the consumer-applicance sides of the business.

Sharp display part number starts with "LQ".In this example, the part # is LQ170M1LA4G.

Hyundai Display Technology Inc. (HYDIS) of Ichon, Korea, is an industry leader in the development, sales, marketing and distribution of high-quality LCD, which is a spin-off from HYNIX Semiconductor Inc. Boe Hydis (Formerly Hyundai Displays Korea)

Part number starts with "U". In this example the part number is UB141X02.

AU Optronics is one of the top 3 worldwide manufacturers of thin film transistor liquid crystal display panels (TFT-LCD), and is the largest in Taiwan. AUO provides customers a full range of panel sizes and comprehensive applications, offering TFT-LCD panels in sizes ranging from 1.5 inches to greater than 65 inches.

Part number starts with "B"